This article appeared in The Nation on Sunday January 4 2015

I learned not to fear infinity,
The far field, the windy cliffs of forever,
The dying of time in the white light of tomorrow,
The wheel turning away from itself,
The sprawl of the wave,
The on-coming water.

In 1960, Richard Murphy, the distinguished Irish poet (whose father was once Mayor of Colombo and who currently lives in Sri Lanka) received warning from another Irish poet, John Montague, of Theodore Roethke’s impending visit to Ireland. In his autobiography, The Kick, Murphy writes: “I decided to try to entice him from the literary pub life of Dublin and invite him across to the west coast.” Murphy thought Roethke, who was at that time famous (in as much as poets can be famous), might help him to find an American publisher if he stayed on Inishbofin and sailed on Murphy’s boat.

Roethke responded positively and said that he and “one wife aged thirty-four, part Irish” would arrive on 25 July 1960. When Murphy first sighted them, he thought he had made a mistake in inviting them: “There they were Ted and Beatrice. A touching sadness seemed to connect her fragile elegance to his hunky dishevelment”. Roethke himself “was like a defeated old prize-fighter, growing bald, groggy and fat, clumsy on his feet, wrapped in silence…”

Once ensconced in Miko’s bar, the previously sullen Roethke became voluble, sipping alternately wine and stout and occasionally taking a naggin of Irish whiskey from his overcoat pocket. When Murphy mentioned Robert Lowell, Roethke banged the table and shouted, “Why are you always praising Lowell? I’m as mad as he is!” He then roared with laughter, making Murphy wonder if “he was deploying madness, which caused him terrible suffering when he plunged from a manic high into a deep depression, as part of a grand strategy to win fame as the greatest poet on earth – America’s answer to William Blake”. Was he licensed to be what Beatrice called “a nut, a drunk and a lecher” because he was a poet? 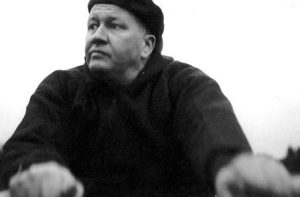 During his visit to Inishbofin, Roethke drank a lot and sometimes seemed on the verge of violence. Eventually Beatrice sent for a doctor who signed a certificate committing Roethke to the County Mental Hospital at Ballinasloe. The law required that he be accompanied to the hospital by police. Beatrice said that when the police were called when he had a manic turn while being presented with his Pulitzer Prize he picked one up under each arm and threw them out of the Waldorf Astoria. The local priest drove Roethke to Ballinasloe in his VW Beetle.

Six weeks later, he returned, chastened, to Inishbofin without Beatrice and Murphy got the job of typing poems for him to send to the New Yorker. Murphy was disappointed that Roethke did not get him useful contacts. Before leaving Galway, Roethke was going to stay at John Huston’s house but managed to engineer matters so that Murphy did not get the chance to meet the director’s wife, who was picking him up at the Great Southern Hotel.

Murphy thought: “Roethke’s ambition seemed deplorable because he displayed it so stridently. Without ambition I might never have written poetry but many years later I came across a sentence by Henri Michaux that left me chastened and subdued: ‘The mere ambition to write a poem is enough to kill it’.”

At the height of his popularity and fame, Roethke balanced his teaching career with reading tours in New York and Europe, supported by a Ford Foundation grant. During his final years he wrote the sixty-one new poems that were published posthumously in The Far Field (1964). This was the first book of Roethke that I bought- I have written on the flyleaf “February 1966”. Its power has never waned for me. The Far Field won the National Book Award. Roethke was found dead in a swimming pool on August 1 1963 on Bainbridge Island, Washington State after a party at the estate of Prentice and Virginia Bloedel. The cause of death was a heart attack although many suspected that alcohol played a part.

The main themes of The Far Field are the individual’s quest for spiritual fulfilment and coming to terms with the inevitability of death:

The far field, the windy cliffs of forever,

The poet’s immersion in nature, his sense of being evolved from primeval organisms is reflected in lines like this:

The river turns on itself,
The tree retreats into its own shadow.
I feel a weightless change, a moving forward
As of water quickening before a narrowing channel
When banks converge, and the wide river whitens;
Or when two rivers combine, the blue glacial torrent
And the yellowish-green from the mountainy upland, —
At first a swift rippling between rocks,
Then a long running over flat stones
Before descending to the alluvial plane,
To the clay banks, and the wild grapes hanging from the elmtrees.

Sad to think that when these words were published the poet was already dead:

For to come upon warblers in early May

Was to forget time and death:

How they filled the oriole’s elm, a twittering restless cloud, all one morning,

And I watched and watched till my eyes blurred from the bird shapes, —

Still for a moment,

Then pitching away in half-flight,

Influence and Reputation
Roethke remains one of the most distinguished and widely read American poets of the twentieth century. He influenced many subsequent poets including Anne Sexton, Sylvia Plath and James Dickey. Clive James was not a fan. “It should be obvious by now that the general critical view of Roethke has not a great deal to do with poetry, and everything to do with his efforts (heroic efforts, considering what he went through: but heroism is a term of accentuation, not necessarily of approval) to get established as a poet, to Make It… It seems probable that in Roethke’s case the general critical view has followed the lead of his fellow poets, who simply liked him, just as much as it has followed the lead of industrious scholarship, which finds his work such a luxuriant paradise of exfoliating symbols.” Other critic share James’s view that “Roethke’s incipient individuality as a voice was successively broken down by a series of strong influences – from the close of the thirties these were, roughly in order: Auden, Eliot, Dylan Thomas, Yeats and Eliot again.”

Roethke himself was not ashamed of echoing other poets and indeed revelled in it. He gave a piece of advice regarding influence: ”don’t fret too much about being ‘influenced’ but make sure you chew up your old boy with a vengeance, blood, guts and all.” In 1959, he wrote an essay in the Yale Review called, “How to Write Like Somebody Else”. In that, he described his relation to WB Yeats in terms of “daring to compete with papa.” He boldly quotes his own poems and prompts criticism by blatantly saying who influenced them. He even points out his own “blunders”. James calls some of Roethke’s work “sub-Auden” but Roethke describes Auden’s own “pillaging”, describing him as “a real magpie with a cormorant’s rapacity and the long memory of the elephant”. Roethke’s drive to master his precursors led him to literary innovations that were his own.

“There is no poetry anywhere,” James Dickey wrote in the Atlantic (Nov. 1968), “that is so valuably conscious of the human body as Roethke’s; no poetry that can place the body in an environment.”

John Berryman shared Roethke’s problems with manic depression and alcohol. They did not always get on but there was mutual respect as well as rivalry. Berryman outlived Roethke but eventually gave in and jumped off a bridge. In the New York Review of Books dated October 17 1963, Berryman published a moving tribute entitled “A Strut for Roethke”.

Westward, hit a low note, for a roarer lost
across the Sound but north from Bremerton,
hit a way down note.
And never cadenza again of flowers, or cost.
Him who could really do that cleared his throat
and staggered on.

The bluebells, pool-shallows, saluted his over-needs,
while the clouds growled, heh-heh, & snapped & crashed.

needing a lower into friendlier ground
to bug among worms no more
around our jungles where us blurt ‘What for?’
Weeds, too, he favoured as most men don’t favour men.