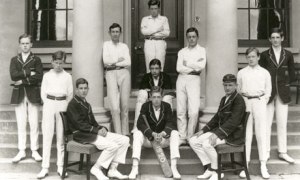 I was recently invited to a reception at the Galadari Hotel in Colombo to meet the Irish cricket team participating in the T20 tournament. Our boys in green were rather glum at the Galadari, following a defeat by Australia (in a joust truncated to ten overs each). Captain William Porterfield had been dismissed with the first ball (he had suffered the same fate against England in Bangalore last year and he repeated the same trick against the West Indies in Ireland’s next and final game 2012 T20 game). I had heard rumours about a stomach bug but that did not stop the glum players tucking enthusiastically into the spicy buffet.

It was quite a quirk of fate that Ireland’s cricket team should depart from a tournament in Sri Lanka partly because torrential rain prematurely ended their match against the West Indies. When I first came from Ireland to live in Sri Lanka ten years ago, a friend asked me if I missed the Cork rain. I said that I missed its moderation. Up in the mountains where we live, the monsoon season generally seems to last for 13 months each year. Hiding indoors, it seems as if we have been living underwater. However, this year there has been a prolonged drought even at our mountain retreat.

Dr Johnson famously remarked, “Sir, a woman preaching is like a dog’s walking on his hind legs. It is not done well; but you are surprised to find it done at all.” Some might think that an Irishman playing cricket would be a similar phenomenon. But no!

For some time, I had been aware of one celebrated Irish cricketer. One of the strange facts fairly commonly known about Samuel Beckett is that he was the only Nobel Literature laureate mentioned in Wisden Cricketers’ Almanack, the cricket bible. Beckett played for Trinity College, Dublin in two first-class games against Northamptonshire and apparently acquitted himself well.

In his 2011 MCC Lecture, Kumara Sangakarra spoke about cricket in Sri Lanka being part of the colonial legacy. It was colonialism that prevented cricket catching on in Ireland. Irish nationalists regarded cricket as a symbol of imperial oppression and cultivated the essentially Irish sports of Hurley and Gaelic football as means of building a national identity.

A ban on playing “foreign” (i.e. English) games by the GAA (Gaelic Athletic Association), which was an integral element of the push for Irish independence, limited the spread of cricket in Ireland. The ban was not lifted until 1970.

Despite the tinge of treason, cricket began to spread soon after it was introduced to Ireland by the English in the early 19th century. Many of the clubs which were founded then are still in existence today. The first match played by a national Irish team was as long ago as 1855. This was against The Gentlemen of England in Dublin. The Irish Cricket Union (ICU) – the governing body of Irish cricket – was officially founded in 1923, although its predecessor had been active since 1890. In common with a number of other Irish sporting governing bodies, the Union was formed to represent cricket throughout the island of Ireland, rather than just the Republic.

So the Irish cricket team is one of those cross-border institutions dismissed by Bernadette Sands-McKevitt, hunger striker Bobby Sands’s sister, wife of Real IRA leader, Michael McKevitt. “Bobby did not die for cross-border bodies with executive powers. He did not die for nationalists to be equal British citizens within the Northern Ireland state”.

At the Galadari reception, I committed a social faux pas. I was in conversation with Arun Narayan, Vice President of the Irish Investment and Development Agency (IDA) in India. I spotted a ginger cricketer heading towards us. I extended my hand and said “Pleased to meet you, Kevin”. He muttered: “I’m Niall. That’s Kevin over there”. Brothers Niall and Kevin O’Brien have been the backbone of the current team. I blundered on by asking if he played English county cricket for Somerset. No, he played for Northamptonshire. Kevin plays for Somerset. My prior research had clearly left my brain. My study of team photographs had been in vain. Luckily, I did not get the chance to ask where Eion Morgan was. I later discovered that he was playing for England.

Current batsman Ed Joyce had also joined the imperial project and played for Sussex and Middlesex in county cricket and in 2005 became the first batsman to hit 1,000 runs. Joyce was born in Dublin and like Beckett was educated at Trinity College. Despite that he played for England. On February 2, 2007, Joyce scored a match-winning 107 from 142 balls, helping England amass 292-7. He got a special dispensation from the ICC to play later for Ireland. Joyce said in 2010: “When I made the decision in 2001 to try and play for England, it was with a view to trying to play Test cricket which is the pinnacle of the game and which of course Ireland doesn’t play.”

Easily noticeable at the Galadari reception was Boyd Rankin who is six foot seven. The T20 tournament in Sri Lanka will be his last outing for Ireland as he hopes to play for England. He has signed a three-year contract with Warwickshire.

Paul Stirling is a quality batsman with several four-day centuries for Ireland, but he has still to make his first-class debut for Middlesex after three years at Lord’s.

When Jack Charlton was manager of the Irish football team he became a hero to the Irish. His success depended on him finding effective players with often tenuous claims to Irish nationality. Wits dubbed the FAI (Football Association of Ireland) Find an Irishman. Irish cricket stalwart Trent Johnson was born in Wollongong, Australia. An unusually jovial presence at the Galadari reception among the morose players was coach Phil Simmons, a large Trinidadian, whose nephew Lendl plays for the West Indies. 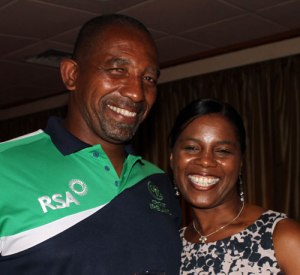 In the 2011 World Cup, Ireland scored a historic victory against England. Ireland beat England by three wickets on 2 March 2011 with Kevin O’Brien hitting the fastest World Cup century off only 50 balls. It was the highest successful run chase (329 in 49.1 overs) in World Cup history.

Wicket-keeper Gary Wilson with a  nine-year-old Hiberno-Lankan charmer called Luca. I must ask his father, Hemantha and mother Linda who the boy would support if Sri Lanka were playing Ireland. 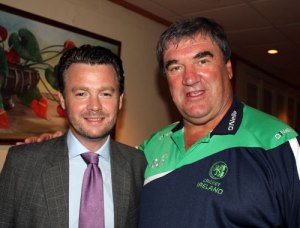 At the Galadari reception, the Irish ambassador Feilim McLaughlin, praised the Irish team for the great PR job they were doing for Ireland in the cricket-crazy world of the rest of the ex-British Empire. That may be true but the individuals did not seem very comfortable with their PR role. Niall O’Brien made a good effort at putting himself about but seemed ill-at-ease. Niall had once said of Kevin “in the field he was grumpy, he was moping around … when he’s like that, he tends to kinda take the bull by the horns” Most of the players seemed grumpy, clustered together muttering among themselves or stayed close to their WAGS (William Porterfield’s girl friend Natalie, resplendent in a leopard-skin patterned blouse). 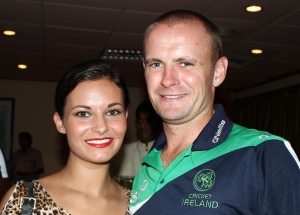 I found crassness of the commercialism on Star TV quite astounding. The same ads showing smug middle-class Indian families were repeated endlessly and squeezed in between balls and even as a ball was being bowled ads appeared at the side and bottom of the screen. Occasionally, there was something a little different as Kevin O’Brien popped up to advertise the attractions of his homeland. Sometimes Kevin was extolling the beauties of the Irish landscape. In another ad he was trying to persuade foreign students to go to Ireland and pay for a great education. A third ad had Kevin working for the IDA, trying to persuade foreign investors to put their money into the Irish economy.

It was a disappointing exit by the Irish. Ireland did not even get to play two entire games. Playing the West Indies, eventual winners of the tournament, Ireland made 129-6 in 19 overs after being asked to bat first at R. Premadasa Stadium, and persistent rain prevented any further play. According to the peculiar rules of this tournament, Ireland were out although they scored 129 runs and West Indies scored none. Something to do with an abstruse calculation of average run-rates apparently.

Despite years of being “promising” Ireland’s cricket faces a bleak future. ICU CEO Warren Deutrom doggedly fights for Test status but Trent Johnston believes other Associate nations are begrudgers. “Why don’t Bangladesh and Zimbabwe want to play us? I know why, because they’re scared that we’ll beat them and that we’ll go above them in the rankings. I know that for a fact.”

Phil Simmons rarely gets his full squad together in the Irish summer because of the players’ commitments to English county cricket. Many of his seasoned players will no longer be available to him at all. There are no fixtures on the horizon to test the new team he has to develop, first to qualify for and then to compete in the 2013 World Twenty20 and 2015 World Cup.