Cuzco – the Navel of the World

This is an extended version of an article that appears in the March 2014 issue of Echelon magazine.

Sacred valley at the top of the world with great clubs and restaurants.

Peru has had a violent history even until recently. There continues to be a divide between indigenous people and the descendants of the Spanish conquerors.

There are flights to Cuzco from Lima but there are dangers to health because of altitude sickness; the ancient capital of the Incas is 3,400 metres above sea level. Paul Theroux told a story, probably apocryphal, of a tourist’s teeth exploding. I became distinctly dizzy in Huancavelica (3,660 metres).  It is advisable to make a gradual progress by road or rail to Cuzco, in order to acclimatise yourself gradually to the altitude.

I bought a fascinating book in Cuzco written by one of the city’s native sons. Garcilaso de la Vega’s Comentarios Reales de los Incas, was published in 1609. Garcilaso’s dual heritage enabled him to provide a subtle critique of Spanish colonialism and the sufferings of native Andeans. Garcilaso’s mother was an Inca princess, and his father was a Spanish conquistador. Garcilaso unsuccessfully argued for a colonial regime led by men who could harmoniously reconcile Spanish and Incan traditions. That kind of harmony is still lacking today. He based his accounts of Inca life and the conquest on stories heard from his Inca relatives when he was a child in Cuzco.  He portrays the Inca as benevolent rulers who governed a country where everybody was well-fed and happy. 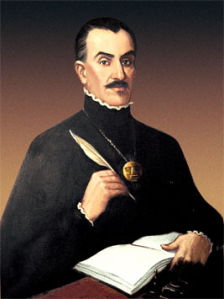 The Incas carried out human sacrifices and used slave labour. The conquistadors employed great cruelty to extract precious resources to sustain Spain and its Empire. The Sendero Luminoso (Shining Path Maoist terrorists) were brutal, purportedly in pursuit of social justice, as were the peasant groups formed to oppose them in the face of government indifference. When the Peruvian army did take an interest, they slaughtered innocent villagers as well as revolutionaries. The army captured the last surviving Sendero leader as recently as 2011.

In January 2014, the shrunken figure of Abimael Guzmán, the  philosophy professor who founded  Sendero Luminoso, appeared in a Lima court to face charges of killing 25 people and injuring more than 150 in 1992 with two car bombs in Miraflores neighbourhood of the capital. I stayed in that neighbourhood. I also stayed in the Andean town of Huancavelica, where I registered at the local police station. Sendero Luminoso blew up that police station the day after I was in it. In August of 2003, Peru’s Truth and Reconciliation Committee stated that upwards of 69,000 people died in the struggle between Sendero and government security forces. A major Sendero tactic was the mass slaughter of the indigenous people it claimed to be fighting for in order to goad the authorities into matching savagery. 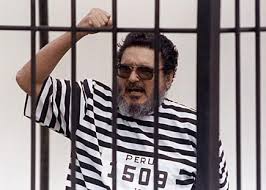 Today, not everything is perfect but there is relative peace in Peru. Cuzco epitomises a Peru where foreigners can come to enjoy historical monuments and incredible scenery, eat and shop well and party. Travelling high up in the Andes, I witnessed grinding poverty among the indigenous people. A citizen of Lima earns 21 times what a resident of the interior earns. In one small town, drunken Indians were rolling in the gutter and rats disturbed my sleep in the “hotel”. Even in coastal areas, life seemed hard. In one seaside village, we were hungry and disgruntled at the lack of food in what passed for restaurants. I later realised, to my shame, that the large fish they managed to find for us was probably intended to feed the whole village.

Peruvians have been eating guinea pigs for millennia. I tried it twice myself while in Cuzco. The first time was in a rather swish restaurant called Cicciolina. I swear that I did not know what cuy was until after I had swallowed it. This was a minute cube of meat, rather like liver, which went down in one swallow. The second occasion was at lunch in a more downmarket restaurant where the creature was  splayed whole out on the plate allowing no room for doubt that it was a guinea pig. Although, I knew that it was rodent rather than porcine, it did taste like pork crackling. I am afraid the creature died in vain because I could not eat much of it. I did not like the way it was looking at me. 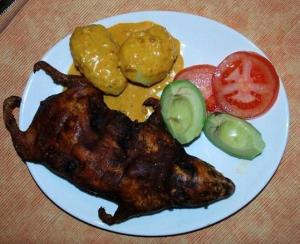 Trip Advisor reviews 368 restaurants in Cuzco. After travelling in the altiplano and surviving on dishwater and dog soup served in cracked plastic bowls, it was very heaven to be in Cuzco. 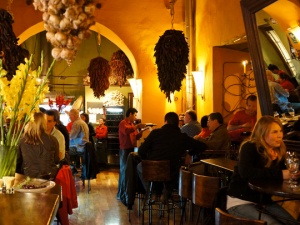 On the second floor of a lofty colonial courtyard mansion, Cicciolina is eclectic and international – as well as guinea pig or alpaca you can eat crisp polenta squares with cured rabbit, duck carpaccio and tender lamb. The service is impeccable as well as amiable. The restaurant provides haute versions of cuzqueño classics like anticuchos (beef skewers), 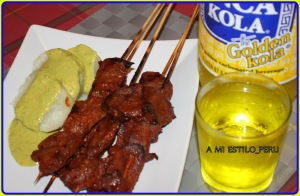 The humble potato came from Peru before Sir Walter Raleigh took it to his stolen land in County Cork. Peruvian potatoes come in many varieties – and colours. 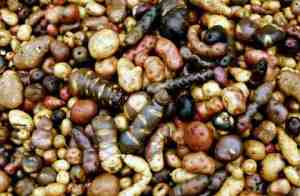 When I travelled around Peru, I experienced some very basic accommodation. However, Cuzco has a wide range of hotels to suit every budget. The Loki Hostel caters for backpackers and partygoers. 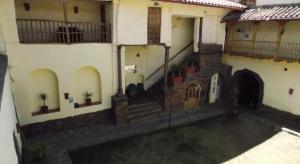 There are many two-star hotels. Hostal Qorikilla is possibly the cheapest. It is practically falling apart, but the kind, unassuming staff make it a favorite.

At the other end of the scale is the Palacio del Inka, an opulent colonial mansion built on Inca foundations, with parts of the building dating back to the 16th century, when Francisco Pizarro was an occupant. 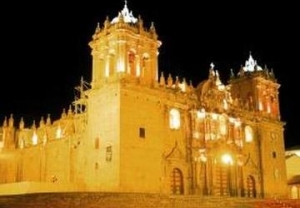 The name “Cuzco” means “the navel” – the centre of the Inca Empire and therefore the world.  It lays claim to being the oldest continually inhabited city in the western hemisphere. Cuzco is a many-layered city – beginning with a culture dating back a thousand years before Christ, through the Incas, via the Spanish conquistadors to, in 2014, nightclubs, designer boutiques and restaurants run by celebrity chefs.  After the conquest, the Spaniards used the stones of the Inca buildings to build a new town. Most of the buildings in post-conquest Cuzco were rebuilt after an earthquake in 1650. There was another earthquake in 1950, after which the buildings were faithfully restored using pink or grey stone often using material from Inca buildings.

Modern Cuzco is a lively place with attractions for young people as well as those interested in historic monuments and trekking. Cuzco is a party place with an unlimited range in bars and clubs spread out all over town. As Cuzco has become increasingly important for the backpack industry, many hotels and hostels have organised pub-crawls, theme nights and live performances around town. Paddy Flaherty’s must be the (in the altitude sense) highest Irish Pub in the world.  If you wish to travel to the capital of the Inca empire to drink proper Guinness on draught, mix with Europeans watching British sports on the big screen, this could be the place for you.

The dance clubs don’t get going until around midnight or one in the morning and you can stay out  until dawn.

You can enjoy Cuzco vicariously from your armchair. Michael Palin visited Cuzco in 1997 for the BBC. You can watch this on YouTube https://www.youtube.com/watch?v=YQLX3AjHF_s

Palin visited the most famous relic of the Inca Empire: the lost city of Machu Picchu. Palin wrote about Pongo de Mainique, the portal to the afterlife of the Machiguenga Indians and home to the Spectacled Bear among other animals.  “Nothing I have read or fantasized about has prepared me for this place. It’s an enchanted world.” If you get to Cuzco, you can take a trip to Pongo. http://www.tikatrek.com/en/program/116/pongo-de-mainique.

In December 1980, the BBC broadcast a programme called “Three Miles High” in the series Great Railway Journeys of the World in which the late lamented Miles Kington travelled from Lima through the Andes via Punto Ferroviario, Huancato by steam train to Huancavelica, by bus to Cuzco & Macchu Picchu to Ayaviri and Lake Titicaca to Bolivia.

The Inca fortress of Sacsaywamán is less than a 2km trek uphill from the Plaza de Armas. In 1536, the fort was the site of one of the bitterest battles of the Spanish conquest. More than two years after Pizarro’s entry into Cuzco, the Incas recaptured Sacsaywamán and used it as a base to lay siege to the conquistadors in Cuzco. Thousands of dead littered the site after the Incas’ defeat, attracting swarms of carrion-eating condors. 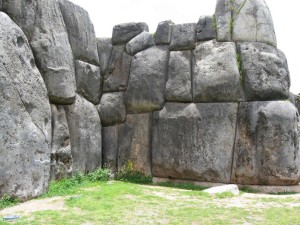 Peru was blighted by the resource curse in the 16th Century and is blighted still in the 21st. Huancavelica, 200 miles from Cuzco,  was founded in 1572 for the purpose of mining mercury, which was essential to extract silver from ore.  Today Peru still has an impoverished indigenous population prey to the extractive industries, this time run by multi-nationals rather than the Spanish Empire. Today illegal gold mining in Peru is causing deforestation and serious mercury contamination of the food chain.

The Peruvian economy is heavily dependent on the export of copper, gold, oil and gas, often located on indigenous lands. A new law offers some hope to the indigenous communities. Extractive projects will require prior consultation. The government will have to listen to the concerns of indigenous communities and try to balance their needs with the desires of multi-national corporations given a free hand by previous administrations. The current government seems committed to the idea that all Peruvians should benefit from the nation’s natural resources. A new tax on the mining industry is expected to bring in additional government revenue of more than $1 bn, which will be used for social programmes.

Let us not forget that tourism is itself an extractive industry. In my dreams of visiting magical sites such as the Taj Mahal and Venice, I imagined myself all alone. Macchu Picchu, like those places, is always full of people. Machu Picchu was completed around  1450 at the height of the Incan empire.  The Incas abandoned it less than 100 years after its foundation, following the Spanish conquest of Peru.  Macchu Picchu was unknown to the outside world before the American historian Hiram Bingham discovered it in 1911. The removal of cultural artefacts by the Bingham expeditions gave rise to a long-term dispute between the government of Peru and Yale University. As well as natural phenomena like earthquakes and weather systems, sheer volume of tourists threatens Macchu Picchu.

Tourism in Peru has expanded faster than all other sectors. In 2005, the World Tourism Organization stated that Peru had the second largest tourism growth, 28.6%,  in Latin America. There have been problems, such as seasonal unemployment, a rise in sexual abuse and sexually transmitted diseases, poor urban planning, a lack of residential regulations, and destruction of the environment. Before the tourism boom of the last decade, Cuzco supplied a vast majority of the agricultural products for Peru but now former farmers rely on tourism. During the off-season, many people struggle to live. 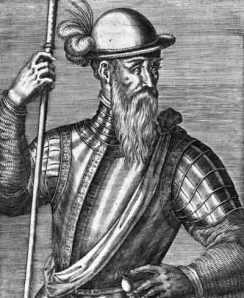 Spanish conquistadors in America destroyed all the settlements in their path and returned from their wanderings to starve, because there was nothing left to loot. Now the emphasis on economic growth and tourism could have the same effect.

3 Comments to “Cuzco – the Navel of the World”