Corporal Donald Payne killed a man. That’s what soldiers do. 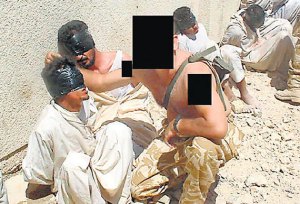 Sir William Gage was asked to establish the facts of the events of 14 to 16 September 2003.

Payne violently assaulted Baha Mousa, punching and kicking. This ended with Baha Mousa lying inert on the floor. According to the Gage Report: “I find that from the outset of their incarceration in the TDF (temporary detention facility) the Detainees were subjected to assaults by those who were guarding them and, in particular, by Payne. I find that they were also assaulted from time to time by others who happened to be passing by the TDF. The assaults by the guards were instigated and orchestrated by Payne. He devised a particularly unpleasant method of assaulting the Detainees, known as the “choir”. It consisted of Payne punching or kicking each Detainee in sequence, causing each to emit a groan or other sign of distress. “

According to Sir William Gage’s report:

A subsequent post mortem found that in the course of his detention in the TDF Baha Mousa had sustained 93 separate external injuries.

He was also found to have internal injuries including fractured ribs.

I find the cause of death to be twofold.

Firstly, Baha Mousa had been made vulnerable by a range of factors, namely, lack of food and water, the heat, rhabdomyolysis, acute renal failure, exertion, exhaustion, fear and multiple injuries.

Both stress positions, which are a form of exertion, and hooding, which obviously must have increased Baha Mousa’s body temperature, contributed to these factors.

Secondly, against the background of this vulnerability, the trigger for his death was a violent assault, consisting of punches, being thrown across the room and possibly of kicks. “ His face was pushed into a stinking toilet

Here is what Baha Mousa looked like after encountering Corporal Payne.

Here is what he looked like before. The children are now orphans as the mother died of cancer. Mousa’s father told Robert Fisk of the Independent that a British officer had come to his home and stared at the floor and offered cash by way of saying sorry.

Baha Mousa was a  receptionist  at the Ibn al-Haitham Hotel in Basra who was captured in a raid by Britain’s finest  on 14  September 2003 after a cache of arms and uniforms was found in his workplace. the army had found weapons including grenades, rifles, bayonets and suspected bomb-making equipment. Along with nine others  he was taken to the TDF for “questioning”.

Kim Sengupta of the Independent met Mousa in late summer 2003 and describes him as polite and smiling.

At a court martial at the Military Court Centre at Bulford Camp on Salisbury Plain, Wiltshire, in September 2006,  five soldiers, including their commanding officer, Colonel Jorge Mendonca, were cleared: the judge ruled they had no case to answer. Corporal Donald  Payne he was charged with Manslaughter, inhumane treatment and perverting the course of justice. Payne pleaded guilty and was sentenced to a year in prison. At the court martial Julian Bevan QC said: “We are not dealing with the actions of a soldier or soldiers in the heat of the moment whilst on patrol in a hostile environment whose conduct is questionable. We are dealing with systematic abuse against prisoners involving unacceptable violence against persons who were detained in custody, hooded and cuffed and wholly unable to protect themselves over a very long period of time.”

Mousa’s father said he was sad but not surprised – it was pointless to seek justice in a British court.

The MoD conceded that there was no evidence implicating Mousa and the others detained  in the death of British personnel. However, in the fog of war there was a heightened atmosphere at the detention centre. “I find that one of the principal causes, but not the only cause, of the violence was an unfounded rumour circulating in 1 QLR to the effect that these Detainees were connected with the murder of Captain Dai Jones, a popular 1 QLR officer, or members of the RMP, also murdered. I find that Peebles, the BGIRO at the outset of the detention, informed two of the guards that the Detainees might be connected with the murder of three Royal Military Policemen”.

Kifah Matair was kicked repeatedly to his kidney area, abdomen, ribs and genitals whenever his arms dropped from the stress position, and had his eyes gouged. The youngest, unnamed victim, 18 at the time, was forced to squat with his face directly over a toilet.

“On arrival at BG Main the Detainees were received by Corporal Donald Payne, the 1 QLR Regimental Provost Corporal.

They were searched, handcuffed, hooded and placed in the temporary detention facility, the TDF.

Some were hooded with two, if not three, hoods.

In the TDF they were made to adopt stress positions, at first in a ski position (as seen in the Payne video).

Subsequently they were permitted to sit down but had to maintain their hands outstretched in front of their bodies and still handcuffed.

I find that for almost the whole of the period up to Baha Mousa’s death on the evening of 15 September the Detainees were kept handcuffed, hooded and in stress positions in extreme heat and conditions of some squalor.

They were guarded first by two men from another A Company multiple, but from about 19.00hrs on 14 September until Tuesday morning by members of the Rodgers Multiple.

I find that from the outset of their incarceration in the TDF the Detainees were subjected to assaults by those who were guarding them and, in particular, by Payne.

I find that they were also assaulted from time to time by others who happened to be passing by the TDF.

The assaults by the guards were instigated and orchestrated by Payne.

He devised a particularly unpleasant method of assaulting the Detainees, known as the “choir”.

It consisted of Payne punching or kicking each Detainee in sequence, causing each to emit a groan or other sign of distress.

Payne, as Provost Corporal, was himself supposed to be supervising the welfare of the Detainees in the TDF.

I also find that Payne and the guards should have been supervised by Major Michael Peebles, the Battlegroup Internment Review Officer (the BGIRO).

From the evening of 14 September and into the afternoon of 15 September, the Detainees were questioned by two tactical questioners.

The whole process was lengthy and in one instance involved a Detainee (D005, the youngest) being placed for over an hour very close to a noisy and hot generator.

The tactical questioning went on well past the fourteen-hour time limit, at the end of which the Detainees should have been either released or transferred to the Theatre Internment Facility, the TIF.

In fact, the nine surviving Detainees did not arrive at the TIF until Tuesday, 16 September, some 55 hours after the arrest of those in the Hotel.”

Procedures shown in the video were banned from use by British military personnel on 2 March 1972, by On the 13th July 2009, a video reportedly showing Cpl Payne abusing Iraqi prisoners was released as part of the evidence being presented to the public inquiry into the death of Baha Mousa. (http://www.guardian.co.uk/uk/video/2009/jul/13/baha-mousa-inquiry). The video reportedly shows Cpl Payne forcing hooded and bound prisoners into stress positions, pushing and shoving prisoners, and aggressively shouting obscenities at them whilst they clearly vocalise their distress.

Procedures shown in the video were banned from use by British military personnel on 2 March 1972, by Edward Heath after their use in Northern Ireland was deemed illegal under English law and  The European Court of Human Rights found the techniques used in Northern Ireland “amounted to inhuman and degrading treatment”.

Robert Fisk did his time in as front-line reporter in Belfast during the Troubles “listening to the same kind of arrogant, vicious, indifferent reaction to the Army’s brutality. It was always the same. Terrorists. Terrorist propaganda. The extraordinary discipline of British squaddies under enormous pressure, etc, etc, etc. Then – when the game was up and the evidence too fresh and too overwhelming – I used to get what we would today call the “Abu Ghraib response”. A “few bad apples”. Always a “few bad apples”.”

Baha’s father was a senior police officer, permitted by the British to carry a pistol and wear his blue uniform. Colonel Mousa believed the real reason his son was killed was he had seen several British troops had opening the hotel safe and stuffing  currency into their pockets.

Nineteen soldiers could face criminal charges for their role in the death of innocent Iraqi Baha Mousa following yesterday’s finding by a public inquiry that he was the victim of “appalling and cowardly” violence while in British custody. Three serving soldiers, one an officer, have been suspended following Sir William Gage’s inquiry.

Gage’s  findings will add to pressure on the Government to order answer wider  allegations of torture and abuse. There are several legal challenges on behalf of hundreds of Iraqi. Next month the Court of Appeal will rule on a case involving 142 Iraqis.

Sri Lanka’s only friend in the British government Defence Secretary Liam  Fox said: “It is clear there were serious failings in command and discipline in the First Battalion, The Queen’s Lancashire Regiment … There was a lack of clarity in the allocation of responsibility for prisoner handling process and sadly too there was a lack of moral courage to report abuse.” But he rejected advice to ban “harshing” – which involves screaming at detainees during interrogation.

According to Fisk “It wasn’t the brutality that was “systematic”. It was the lying that was systematic. In Northern Ireland, among the Americans after Abu Ghraib and Bagram and the black prisons and the renditions.”

Former British foreign secretary David Miliband is still calling on the international community to take action against Sri Lanka for alleged war crimes at the end of the successful war against the Tamil Tigers. Miliband himself was complicit in extraordinary renditions and torture. It is only two years since the end of the war in Sri Lanka. A commission is looking into what happened but this is not quick enough for Miliband.
The Gage inquiry took three years. It is eight years since Mousa was brutally tortured and murdered. Payne served a year in prison.

2 Comments to “More Fog of War – Another British War Crime”