The Heavy Bear who Goes with Me

In this poem, Schwartz objectifies his own body as a separate entity:

The heavy bear who goes with me,

A manifold honey to smear his face,

Clumsy and lumbering here and there,

The central ton of every place,

The hungry beating brutish one

In love with candy, anger, and sleep,

This separate entity is somewhat gross, something of a burden and an embarrassment. I am reminded of Yeats’s image of old age as a tin can tied to a dog’s tail. Schwartz uses as an epigraph a quotation from the philosopher Alfred North Whitehead: “the withness of the body”

Whitehead speaks of the “withness of the body” and observes that in daily life our bodies are the immediate environment of our lives.  As children, we learn about this withness in joyful ways; in adults it causes suffering.  Man is a dual creature; consciousness gives him a sense of time and of “otherness,” but at the same time, he is an animal like other animals. Human consciousness exists within a body that demands the same kind of life-sustaining materials and is subject to the same kinds of appetites—for food, for physical comforts—as other, lower creatures. The accompanying bear

Howls in his sleep because the tight-rope

Trembles and shows the darkness beneath.

—The strutting show-off is terrified,

Dressed in his dress-suit, bulging his pants,

Trembles to think that his quivering meat

Must finally wince to nothing at all.

There is no room for vanity here:

A caricature, a swollen shadow,

A stupid clown of the spirit’s motive,

Perplexes and affronts with his own darkness,

The secret life of belly and bone.

This bear is not even under control. With his grossness, he endangers the poet’s relationships:

Touches her grossly, although a word

Would bare my heart and make me clear,

Stumbles, flounders, and strives to be fed

Dragging me with him in his mouthing care,

Amid the hundred million of his kind,

The scrimmage of appetite everywhere.

It is almost as if the body will not allow us to achieve what we really want.  No matter what our intentions, our aspirations, the body cannot travel in that direction. This is sad to read with the knowledge of Schwartz’s own inability to control his compulsions. 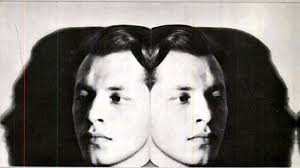 The double or doppelganger is a recurring feature in literature – Dostoevsky’s The Double, The Victim by Schwartz’s friend Saul Bellow, Dr Jekyll and Mr Hyde by Stevenson. In fiction and folklore, a doppelgänger is a double of a living person and sometimes portrayed as a harbinger of bad luck. In some traditions, a doppelgänger seen by a person’s relative or friend portends illness or danger while seeing one’s own doppelgänger is said to be an omen of death. Heautoscopy is considered a possible explanation for doppelgänger phenomena. This is a term used in psychiatry and neurology for the reduplicative hallucination of “seeing one’s own body at a distance”. It can occur as a symptom in schizophrenia and epilepsy. The presence of the double causes conflict, as there can never be peaceful co-existence between a character and their second manifestation. In many instances where there is a double, it is the embodiment of a specific set of characteristics either that the original character desires to have, or a concentration of their worst characteristics, thus living up to the “evil twin” stigma.

There are striking pictures of Schwartz looking in a mirror or as a double image. His protégé, Lou Reed, wrote a song called “I’ll Be your Mirror”.

Schwartz is following in the doppelgänger tradition by dramatizing man’s dual nature. The only creature on earth possessing a sophisticated consciousness that gives him a moral sense and an understanding of the consequences of his actions, man is nevertheless compelled to exist in a material body that is really as much a part of him as is his higher intelligence. No matter how hard he tries, man is never able to separate his spiritual nature from his physical side.

Schwartz believed his name embodied a dualism. The surname is very Jewish and the forename a bit WASPy. There is a dichotomy between old world civility and new world philistinism, and generational differences between immigrants and their American-born offspring. Much of his work is about attempts to transcend what he saw as the inevitable disappointments and profound disillusionment of life.

There is also, as in Yeats, much about masks.

But tonight I am going to the masked ball,

Because it has occurred to me

That the masks are more true than the faces

Perhaps this too is poetry?

Now that I know that most falsehoods are true

Perhaps I can join the charade?

Schwartz often focused on middle-class New York immigrant families whose children are alienated both from their parents and from American culture and society. There is much talk of hope as well as despair.

How the false truths of the years of youth have passed!

Have passed at full speed like trains which never stopped

There where I stood and waited, hardly aware,

How little I knew, or which of them was the one

To mount and ride to hope or where true hope arrives.

The themes of separation and isolation run through Schwartz’s poetry and prose. The title piece of In Dreams Begin Responsibilities, and Other Stories (1938) is an account of an evening spent viewing a film about the narrator’s parents. Schwartz examines conflicts between the Jewish heritage and modern American culture. Jewish life in the United States is also the subject of The World Is a Wedding (1948), a short story collection that is a novella in ten sections. “The Child Is the Meaning of This Life” displays Schwartz’s interest in family relationships, the role of the artist, and feelings of alienation; “America! America!” focuses on a writer’s sense of isolation from his fellow New Yorkers, his family, and his Jewish heritage.

Delmore, although he was a Jewish writer immersed in Freud and Marx, was also interested in Christianity and there are strong Christian themes in his works. The inevitability of death was a common theme as were love, forgiveness and the inability to escape our past.

Summer knowledge is the knowledge of death as birth,

Of death as the soil of all abounding flowering flaring rebirth

He wrote memorable phrases about poetry and music.

For poetry is the sunlight of consciousness:

It is also the soil of the fruits of knowledge

In the orchards of being.

In his poem “Vivaldi”, he wrote:

Deathless and present in the presence of the deathless present.

This is the grasped reality of reality, moving forward

He was an essentially urban being being but could write about nature. The whole of the poem “A Little Morning Music” is quotable but here is a taste:

The birds in the first light twitter and whistle,

Chirp and seek, sipping and chortling – weakly, meekly, they speak and bubble

As cheerful as the cherry would, if it could speak when it is cherry ripe or cherry ripening.

Next week- Delmore’s decline and death.