This article appeared in Ceylon Today on Thursday December 15 2016. 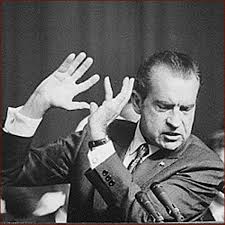 The Madman on the Stair

Joseph Laitin, of the Office of Management and Budget, told Anthony Summers, author of The Arrogance of Power, that he was on his way to a meeting in the West Wing with Treasury Secretary George Schultz in spring 1974. “Just as I was about to ascend the stairway, a guy came running down the stairs two at a time. He had a frantic look on his face, wild-eyed like a madman. And he bowled me over … before I could pick myself up, six athletic-looking young men leapt over me, pursuing him. I suddenly realised that they were Secret Service agents, that I’d been knocked over by the president of the United States”.

Many people speculated about Nixon’s mental health. Someone who had served with Nixon in the Navy said he had “severe ups and downs” even in the 1940s. Nixon had once “loved” JFK but soon grew to detest him, convinced, with good reason, that Kennedy had beaten him fraudulently in the 1960 presidential election. Kennedy came to regard Nixon as “mentally unsound”. Frank Sinatra, who was campaigning for JFK, wanted to get publicity for a report that Nixon was seeing a psychiatrist. Pat Brown, Nixon’s opponent in the election for governor of California said: “This is a very peculiar fellow.  … I really think he’s psychotic … an able man but he’s nuts …” BBC correspondent Charles Wheeler was Nixon’s guide to East Berlin and described him as “weird …Totally mad.”

Nixon first visited Dr Arnold Hutschnecker, a specialist in psychosomatic illnesses, in 1951, after reading the doctor’s best-selling book, The Will to Live.  Hutschnecker continued to meet Nixon sporadically until shortly before Nixon died. He visited the president twice at the White House and was the only mental health professional known to have treated a president. Although he would not talk about it while Nixon was alive, Hutschnecker had discussed the treatment in several interviews. In the 1950s, he suggested that ”mental health certificates should be required for political leaders, similar to the Wasserman test demanded by states before marriage.” 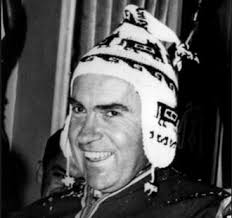 Nixon admitted that he started using sleeping pills in the late 40s. Over a long period soon after becoming president, he also consumed, without prescription or medical supervision, large quantities of an anti-epileptic drug called Dilantin. A doctor consulted by Anthony Summers was alarmed that anyone in a position of responsibility, particularly one with access to the nuclear button, was taking Dilantin and drinking alcohol.

Nixon’s lawyer during the Watergate affair, Fred Buzhardt, later remembered him as “the most transparent liar” he had ever met. Even during his farewell speech after he had resigned he embarked on a bizarre stream-of-consciousness in which he claimed that he was not educated and had no personal wealth in fact, he had a good law degree and was very rich. Barry Goldwater, who had long believed Nixon was insane, said when he was trying to persuade him to resign during Watergate: “The danger in this whole thing was his constant telling lies”. Nixon himself said to one of his aides before meeting Mormon elders: “Whatever I say in there, don’t you believe a word of it…” This reminds me of something Rauf Hakeem said in a 2007 interview: “The subject of political morality is a relative thing. The current electoral system does not give any government the confidence to try and deliver on the commitments made during the polls.” Like Hakeem, Nixon believed that “dissembling” and “hypocrisy” were part of political life. Kissinger thought Nixon convinced himself by his distortions.

The tendency was already there in his student debating days when his debating coach was disturbed by his “ability to slide round an argument rather than meet it head on. There was something mean in him, mean in the way he put his questions, argued his points”.

In his first days working for the law firm Wingert and Bewley he made a blunder in court which led to the firm being sued for negligence and Judge Alfred Paonessa sternly reprimanded Nixon: “Mr Nixon, I have serious doubts about your ethical qualifications to practise law in this state of California. I am seriously thinking of turning this matter over to the Bar Association to have you disbarred”. 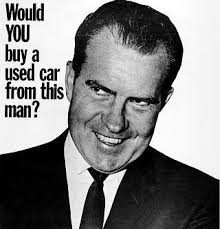 Madman with a Button

Sometimes Nixon used madness as a political strategy. He told Kissinger to tell the Soviet ambassador that he had lost his senses and might use nuclear weapons in Vietnam. Nixon’s Watergate nemesis Senator Sam Ervin said that the main issue was not that the president was a crook – most rational people had long accepted that: “A certain thumb moving towards a certain red button, a certain question of sanity … Query: if the man who holds the thumb over the button is mad …”. Nixon  was heard boasting that he could press a button and in 20 minutes 50 million Russians would be dead. 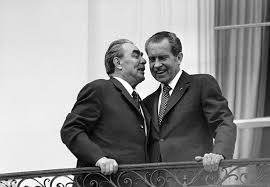 When Soviet-backed Arab troops moved into Israel there was a real prospect of world war as Kissinger believed that Soviet troops would be sent in. Nixon did not attend a single meeting on the conflict during the first week. US troops and nuclear weapons were being lined up. Nixon was unavailable – drunk or sleeping. At one point, he had to be rescued from an overflowing bath tub. It was alleged that he had hit his wife. He was wandering the corridors of the White House talking to portraits of former presidents.

Nixon’s anger sometimes tipped over into violence. At a rally in Southern California, he spotted a Democratic party activist who had plagued him. He strode over and slapped her in the face. He physically attacked the producer of a TV programme because he allowed college students to ask him difficult questions. On the same tour, he punched someone in the face. His aide Bob Haldeman recalls that, on a tour of Iowa, a military aide called Don Hughes was sitting in the car seat in front of Nixon. Nixon, frustrated by the way the tour was going, repeatedly kicked with both feet the back of the seat in front of him.  The next time the car stopped Hughes got out and silently walked away. There is film evidence of Nixon manhandling press secretary Ron Ziegler in New Orleans and he seemed drunk when he gave a speech afterwards.

Nixon’s aide Alexander Butterfield recalls the president shaking with anger when talking about the “Georgetown set”. “Did one of those dirty bastards ever invite me to his f***ing men’s club or his goddamn country club? Not once”. Journalist Hugh Sidey could not detect any human bond between Nixon and his wife but Gloria Steinem saw why Richard and Pat bonded although he was cold to her and beat her. “They were together in their resentment of glamorous people who had it easy…”.

Nixon ordered the army to spy on the young veteran who exposed the massacre at My Lai and griped for hours about the negative publicity: “It’s those dirty rotten Jews from New York who are behind it”.

Although he worked with Jews like Kissinger and Leonard Garment, Nixon used the word “kike” and sent an aide to investigate a “Jewish cabal” at the Bureau of Labour Statistics and complained that there were too many Jews at the IRS. Women in government were a pain in the neck; Italians were all dishonest, as were Mexicans. He often referred to African-Americans as “Jigaboos”.

With Martin Luther King in 1957

A convicted murderer, William Gilday, claimed that he was hired by Nixon aides to carry out dirty tricks, including the ultimate dirty trick of murder. Among those Gilday  was incited to kill were Edward Kennedy and George Wallace. When Wallace was shot, he had to withdraw from the presidential race that Nixon won.

Wallace harboured suspicions of Nixon’s involvement. Journalists Jack Anderson and Drew Pearson infuriated Nixon with their reporting of secret funding. Gordon Liddy said he was charged with finding ways of stopping them. Liddy came to the conclusion that the only way would be to kill them.

More on Nixon’s crimes  – and his connections with organised crime – next week.