This article was published in Ceylon Today on June 3 2020. Unfortunately, there was a ten-day delay between submission and publication and they did not take account of my updates. 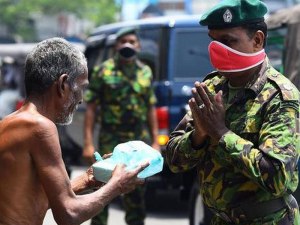 I hope you don’t get bored with me repeating this. Sri Lanka has a population of 21.4 million. There have been eleven deaths from the virus. I have been pressing this point not because I expect other nations to copy Sri Lanka but purely out of bemusement that the Sri Lanka situation has been totally blanked out.

Ireland is often held up as a good example. The death toll there is now (June 2) 1,651, out of a population of 4.9 million. A virtual Irish friend, a former diplomat, tentatively suggested that Ireland might have special circumstances which made it more difficult to cope with the pandemic than it is for Sri Lanka. “Small or medium-sized highly globalised countries located within the main highway of the globalised economy and with high volumes of diverse migrant and visitor population flows (Ireland, Sweden, UK) may have a greater exposure”.

Sri Lanka is not exempt from globalisation. Sri Lanka’s land mass is roughly the same as the island of Ireland but the population is 5.25 times that of the Republic. Like Ireland, Sri Lanka does not have huge cities and there is a lot of open nature and mountains. Ireland has long had a problem with rural depopulation. However, it is obvious that Sri Lanka has a greater density of urban population than Ireland.  Ireland only started attracting immigrants in recent times but Sri Lanka has long had a very diverse ethnic mix. Even today, there are communal frictions because of the government’s insistence on cremation of Covid19 victims.

Sri Lanka’s geographical position makes it a global hub for maritime traffic. It has attracted a vast amount of Chinese investment and personnel. Chinese collaborative projects with Sri Lanka developed a working population of Chinese and Sri Lankans that moved between the two countries.

Among the many factors severely damaging the Sri Lankan economy during the pandemic is the effect on migrant labour. Way back in 2008, I wrote: “remittances from migrant workers represent more than nine per cent of GDP. Sri Lanka receives US$ 526 million more in remittances than it does from foreign aid and foreign direct investment combined.”   Some of the clusters of confirmed cases arose because migrant workers returning from Italy were disappearing into their local communities without registering with the police or being tested.

Sri Lankan National Health Services, headed by Director General Anil Jasinghe, established 46 quarantine centres.  In the early stages, repatriated migrant workers from Italy and South Korea, were placed in quarantine facilities close to their hometowns They were transported by Government and military to prevent contact between family members, and all vehicles and contaminants were duly sanitized.  The military provided beds and bedding for the quarantine units.

Sri Lanka is fortunate in that it is an island nation which accepts most of its visitors through one international airport, Bandaranaike International Airport (BIA). In January, (when the UK was doing nothing) travellers reported that they were subjected to thermal screening at BIA.  Quarantine facilities were quickly established and expanded. Facilities for treating Corona patients were quickly made available in 16 major hospitals with IDH (Infectious Diseases Hospital) at Angoda as the key institution.

One of the advantages that Sri Lanka enjoys is a free healthcare network of state hospitals nationwide supplemented by a thriving well-equipped private system. Sri Lanka’s state-funded universal health care service has considerable experience in managing deadly diseases.  Malaria and polio were eliminated and AIDS, SARS, H1N1, Chikungunya and MERS were successfully tackled. In 2005, Sri Lanka did not suffer the much-anticipated epidemics following the Indian Ocean tsunami.  In the IDP camps at the end of the war against the LTTE in 2009, there was not the predicted outbreak of deadly disease.

MOH (Medical Officer of Health) geographical areas were established across the island in 1926 to provide preventive health services at a community level, through a team of medical officers, public health nurses, health inspectors and midwives.

Dr. Anil Jasinghe, Director General of Health Services in Sri Lanka said: “We have been able to minimize the number of patients and even with the present-day clusters, we believe that with our strong public health system, we will soon be able to curtail the numbers.”

All flights to BIA were stopped from March 19. High-risk areas in the Negombo and Puttalam districts were locked down. Schools closed indefinitely. Government offices closed and working from home was encouraged.  Large gatherings were banned and the planned parliamentary election was postponed. An island-wide curfew was monitored by the police and the armed forces. To date (June 2 ) over 60, 000 people have been arrested for curfew violation and will be prosecuted. Over 13,500 vehicles have been impounded.

The garment export industry stepped in to retool and provide PPE supplies for medical personnel and the general public. The state-owned Sugar Corporation and the private distillery companies provided alcohol-based sanitizers.

Systems were set up at an early stage to facilitate the exchange of medical information. Police were involved at an early stage in tracking down people likely to have been exposed to the virus. Sri Lanka’s defence secretary, Major General Kamal Gunaratne, announced on April 19 that army intelligence officers would obtain the assistance of telecommunication service providers to trace contacts and places visited by COVID-19 patients.

As soon as the Epidemiology Unit of the Ministry of Health hears from a designated laboratory of a positive case, its staff activate “case search” among the infected person’s close contacts. The “activation” essentially involves informing the military and State Intelligence Service immediately, who then proceed to trace those who had been in contact with the patient, and direct them to quarantine.

The army, navy and air force have played a huge role in the success of Sri Lanka’s anti-Covid programme. My Irish friend is correct in saying that it would be unlikely that the Irish defence forces could play as prominent a role as the Sri Lankan Tri-Forces.

There are many who are worried about militarization. “Placing an army General at the helm of the campaign against the epidemic is as inane as asking a medical doctor with zero-military training to lead a war,” wrote columnist Tisaranee Gunasekara. She describes the deployment of sailors as inept. During the current crisis, the Navy handled shipments of food supplies from ports and delivered them to the public.  Sailors were deployed to hunt down a group of drug addicts who had contact with a COVID-19 patient and were evading quarantine. New cases of infection seem to be sailors who have been involved in front-line activities on our behalf. This phenomenon is being described as the ‘Navy cluster’.

Critics argue that the president is ruling by task force without a parliament. The Electoral Commission has declared than an election cannot take place in the foreseeable future. There are calls to reconvene the parliament that was dissolved on March 3. That parliament, elected five years ago, is no longer representative. It has 106 UNP seats but since then the UNP has lost ground to the SLPP and the SLFP barely exists. In the much-delayed local elections of February 2018, the UNP were only able to secure 34 councils out of 340, whereas the SLPP won 231.

The authority of the Irish Cabinet is diminished by the fact that three of its members were voted out of the Dáil (parliament) in the general election on February 8 but remain in Government. It could be argued that Sinn Féin won the election, but they are being kept out of power by the two parties who normally take to turns to govern. The Taoiseach (prime minister) Leo Varadkar is getting good world press for the way he is handling the crisis (and working one day a week as doctor – medical, not political science) but his party was defeated in the election. The Dáil hardly exists at present and its committees are in abeyance.

The argument about militarization could be turned on its head. The military has been civilized to make an effective contribution to civilian well-being. Ordinary people who do not write for newspapers or work for NGOs appreciate this. I have been given permission by the commenter to quote this from Facebook. “Our President is forging ahead in brilliance, with innovative decisions, gaining the confidence of more and more people. This is the very reason for all the Opposition bull shit every day! They have no credibility after yahapalana period!”

2 Comments to “Sri Lanka and the Pandemic Part Two”