This article appeared in Ceylon Today on February 25 2020 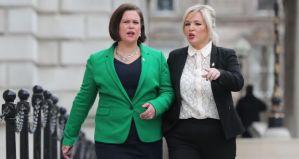 After the general election of February 8, the Dáil, the lower house of Ireland’s parliament, was scheduled to reconvene on Thursday, February 20th.  As I write, the Irish prime minister (Taoiseach) Leo Varadkar is about to hand in his resignation to President Michael D Higgins. Although Varadkar concedes that his party, Fine Gael, lost the general election and has clearly stated his wish to be opposition leader, he and his Government will continue to govern in a caretaker capacity.   Fianna Fáil leader Micheál Martin told a meeting of his parliamentary party that it could be two months before a new government is formed.

This kind of confusion is partly because the Irish system of proportional representation (by single transferable vote with multi-member constituencies) rarely gives one party a decisive number of seats to enable them to form a government. Politicians and voters are well-accustomed to a sometimes-unseemly haggling and deal-making to cobble together a coalition that will be able to govern.

What made this election different is that the party that came out on top was a sworn enemy of the state it was now attempting to govern and within living memory was killing civilians in an attempt to achieve a united Ireland. Elections have usually been about switching power between the two major parties, Fine Gael and Fianna Fáil. This time, Sinn Féin received the most first-preference votes, and won 37 seats. Fianna Fáil finished with 38 seats, including the Ceann Comhairle (Speaker), which brings them to level-pegging with Sinn Féin.  Fine Gael finished third both in seats (35) and in first-preference votes. The three largest parties each won a share of the vote between 20% and 25%.

CNN inaccurately described Fianna Fáil as left-wing and Fine Gael as right-wing. Both parties are centre-right and their origins lie back in the fight for independence from Britain when they both evolved out what was then called Sinn Féin. The current iteration of Sinn Féin was the political face of the Provisional IRA (much as the TNA was the political face of the LTTE). Back in 1998, the Provos and the British government finally accepted that no-one was going to win the war of attrition that had been going on for 30 years, claiming some 3,000 lives. The then president of Sinn Féin, Gerry Adams, and Martin McGuinness were successful in persuading the Provisional Army Council to cease hostilities and eventually surrender their arms.

The current Sinn Féin leader, Mary Lou McDonald, is very different from Adams and McGuinness who maintained a stance of “constructive ambiguity” about the issue of their personal roles in Provo atrocities. She grew up in a privileged background in Rathgar and went to a fee-paying convent school, Notre Dame des Missions in Churchtown.  In 1998, Mary Lou was a promising 29-year-old member of Fianna Fáil living in the pleasant middle-class suburb of Castleknock in Dublin West. She had an MA in European Integration Studies from the University of Limerick. She was seen by some as a possible future cabinet minister or even leader of Fianna Fáil. Strange that by 2004 she was a Sinn Féin candidate for the EU Parliament and was attending the funeral of Seán Russell as chief of staff of the IRA during the second World War, who supported the idea of an armed campaign to establish a German puppet state in Ireland in direct collaboration with the Nazis. One might never know why Mary Lou switched to Sinn Féin but the funeral was clearly a test of her loyalty to her new masters., including the hard veterans of the “armed struggle” who were sceptical of her conversion. She rose so rapidly within that according to Fintan O’Toole she must have “been able to convince the old IRA cohort that she was utterly ‘sound’ on the legitimacy of the armed struggle.” 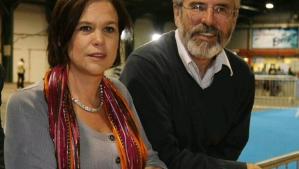 After the Good Friday Agreement, there has been a long peace in Ireland. There is still a border whose existence has been made worrisome by Brexit. We don’t have a united Ireland which was ostensibly the raison d’être of the Provisional IRA. There have been terrorist incidents but these have been the work of splinter organisations whose diehards have been condemned by Sinn Féin. It is bizarre that Sinn Féin did not mention a united Ireland in their election campaign. However, there is a good reason for this. Their surge has been a result of their taking on the issues that bother people today – affordable housing, health, homelessness and the economy. The economy recovered eventually from the 2008 downturn but people were angry with the centre-right duopoly for allowing corruption and the casino culture to get out hand in the first place and then imposing austerity on ordinary blameless individuals so that the EU troika could rescue the banks. Irish voters have noticed that Ireland has one of the most expensive health systems in the world which people cannot access when they need it. During the boom times, housing estates were built which are now empty but homelessness is increasing and people are dying on the streets.

The JVP murdered her husband but CBK still courted them for her coalition. Sinn Féin now have elected representatives in both parts of Ireland, Westminster (although they don’t take their seats) and the EU parliament. Sinn Féin did very badly in the local elections and were not confident enough to put up candidates in all constituencies in the general election. This meant that although they convinced 25% of the electorate to vote for them, they did not get enough seats to form a government.

There are many who abhor the idea of Sinn Féin having any part in the governance of the state without renouncing their past. Even before the election Fine Gael and Fianna Fáil raised a moral objection to coalition with Sinn Féin, citing IRA links, refusal to condemn violence and the malign influence of “shadowy figures”. The memory of the IRA campaign of violence was a defining experience for many older voters but housing is more important to the young.

It may at first sight seem abnormal for Sinn Féin to be so close to being in government but Fintan O’Toole sees it as a new normal. The duopoly of the old civil war parties was only interested in maintaining some kind of normality through continuity and absence of change.  “The terrible secret of the Irish has always been that we don’t want to be colourful, crazy, exceptional, anomalous people. We want to be ordinary. That’s why we have emigrated in our millions – to flee from our own strange and irregular circumstances. Gradually, Ireland has in fact been achieving this bliss of privileged European ordinariness. And what we are seeing now is the political system struggling to catch up with the transformation of a tragical and eccentric place into a post-Troubles, well-to-do society whose citizens expect what they perceive to be realistically achievable Western European standards.” Young people are looking to the great disruptors, Sinn Féin, to provide this.