The Galle Literary Festival is back in business. The festival was founded in 2005 by Anglo-Australian hotelier Geoffrey Dobbs and last took place in 2012. Those attending GLF in 2012 included Tom Stoppard, Aminatta Forna, Richard Dawkins, Simon Sebag Montefiore and David Thompson. Tickets for the 2016 event, which takes place from January 13th to 17th, are due to go on sale from the first two weeks in December. The first list of participants was released on November 11 and the full programme will be announced at the end of November.

Among those participating in January 2016 is the multi-talented Hugh Thomson. I would like to introduce him to Sri Lankan readers who are not familiar with his work. Hugh is a veteran of the literary festival circuit and has previously been invited to Hay-on-Wye, Edinburgh, Oxford and Cheltenham. His most recent book, The Green Road into the Trees: A Walk through England, won the inaugural Thwaites Wainwright Prize for Nature and Travel Writing. Dame Fiona Reynolds, the chair of the panel of judges, described the book as “a narrative journey spiced with humour and anecdote, gritty reality and evocation of place and history.” I have just read the book and agree with Dame Fiona. Hugh himself says: “The thing about The Green Road is the idea of treating your own country as a foreign country. A travel journal can be written about anywhere. It’s not about the quality of the journey; it’s the quality of the writing.”

Hugh has certainly led an exciting life. He’s ridden, driven and hiked across Mexico, Peru, Bolivia, the Himalayas and Afghanistan and cruised down the Amazon. I have been to some of the places described in Hugh’s books and, although his explorations have been more adventurous than mine, the books bring back memories for me. When he was just 22, Hugh led his first expedition to the Peruvian Andes looking for a site that had become lost following its initial discovery.  In 2002 he co-led the expedition which discovered the Inca site of Cota Coca and returned to Peru in 2003, making extensive finds at Llactapata, near Machu Picchu. I can vouch that Hugh’s first book, The White Rock: An Exploration of the Inca Heartland, is an enthralling read. It was the result of a twenty-year long quest to explore and understand the Peruvian Andes in the area beyond Machu Picchu.

If you want a quick taste of Hugh’s writing on Peru I can recommend a Kindle Single which was released on October 11 2015 and costs only $4.99. Two Men and a Mule: The Last City of the Incas, is a brief account of an expedition to Peru undertaken by Hugh with fellow explorer Benedict Allen and a sympathetic mule called Washington. The short work gives a brief reprise of some of Hugh’s previous visits to Peru and provides an introduction to a BBC Radio 4 series, for which they travel down from the high Andes towards the Amazon basin and Espíritu Pampa, the pampa of ghosts, the very last city of the Incas, built at the lowest level of the cloud forest, almost in the jungle. It was here that Tupac Amaru and his pregnant wife were captured by the conquistadores and later brutally executed.

History comes alive in the current day experiences of the three intrepid explorers. They meet many interesting characters on the way. At one point, they stayed at the home of Don Juvenal Cobos, who helped American explorer Gene Savoy uncover Espiritu Pampa in 1964.
I have memories of consuming in the Andes what seemed to be dog and dishwater soup out of cracked blue plastic bowls. Benedict has learnt to be tolerant in his eating habits, so the local delicacy of guinea pig is no problem: “I did try camel once. It was tough, Very tough”. Thomson fears for Washington’s state of mind and has a private chat with him: “He was in a little bog that he clearly liked and was looking particularly sweet, ears twitching, happy after a good night of grazing and munching on the lush pasture”. Thomson told the mule that he knew of Allen’s reputation for eating his travelling companions (camel, mule) but he would not let that happen to Washington. “I felt he was telling me that, whatever happened, he wouldn’t let Benedict eat me either”.

Thomson tries to explain his own fascination with Peruvian history. Something about the Inca sites made him, even on his first visit at the age of 21, aware of his own mortality. Benedict, who has crossed the Gobi desert and travelled the Arctic with a dog team, finds Peru a new experience. In other places he got the feeling that exploration was coming to an end. “Here you’re in the amazing position where you can still find cities, or at least ruins.”
There are vivid descriptions of the high mountains and of the steaming jungles, “Where fruit such as mango, granadilla or papaya grew, bright yellow mountain tanagers, one of the most frugiverous of Andean birds, gathered in gregarious groups”. One can sense the serpents lurking in the undergrowth and the appalling insects fastening on to one’s blood vessels. There are compensations for the discomforts. “The call of the oropendola bird… a long looping noise best described as being like water being flushed down a pipe”. Hugh is not being ungallant when he says this reminds him of his wife. The sound had enchanted her too. 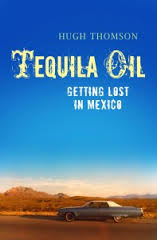 Tequila Oil: Getting Lost in Mexico, was an account of an early journey through Mexico in a classic Oldsmobile 98.  It was serialised by BBC Radio 4. Another of Thomson’s books, 50 Wonders of the World: The Greatest Man-made Constructions from the Pyramids of Giza to the Golden Gate Bridge, is only 200 pages long but the format is coffee table, bigger than The Times Atlas. Hugh says it “would actually make quite a nice coffee table in itself if you put legs on it.”

Nanda Devi: A Journey to the Last Sanctuary is about the sanctuary on the border between Tibet and India, long closed to all visitors by the Indian government. For his BBC TV series, Indian Journeys, Hugh collaborated with former GLF attendee William Dalrymple to make three ambitious films about India, winning the Grierson Prize for Best Documentary Series.  More recently he collaborated with Jonathan Dimbleby to make another major series for the BBC, this time on Russia.

He was BAFTA-nominated for his ten-hour series Dancing in the Street: A Rock and Roll History, which set out to tell the epic story of the “devil’s own music” from its beginnings in the 1950s to the present day. It took four years to make and went on to win numerous awards for the BBC around the world. His passion for documentaries led him to be a founding member of Doc/Fest; an international documentary festival in Sheffield described as the Cannes of the documentary world. It’s still expanding after 21 years.

I have long been planning to write about cruise ships, so I found Hugh’s Kindle Single, At The Captain’s Table: Life on a Luxury Liner, full of useful information. Hugh provides some great tips on getting the most out of a city in one day. The Captain’s Table shows what it’s like to travel “…round the world the soft way.”

Thomson’s vast array of experience makes him a resource for aspiring writers. He has tutored on a variety of courses for organisations including Arvon and Bristol University. “I enjoy teaching,” he says. “It’s a chance to re-engage.” Hugh is now working on his first novel, which is set in Peru. I asked him what else he had been up to of late and it seems he is pursuing that RL Stevenson Travels with a Donkey theme.  He told me that he had “been in the middle of doing this quixotic trip with a mule across the North of England for my next book”.
With his experience of broadcasting and his knowledge of travel writing as well as his fund of anecdotes about his own travel, Hugh is likely to be a star attraction at GLF 2016. Book early to avoid disappointment.

This article appeared in the Sunday Island on 21 November 2015.