This article appeared in Ceylon Today on Tuesday March 31 2015. 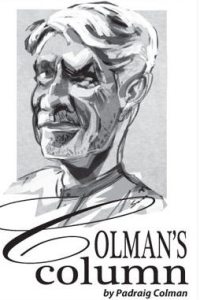 The world was horrified recently at the news that a co-pilot, Andreas Lubitz, had deliberately flown his plane into a mountain killing 150 people. Many have commented that this was the ultimate expression of modern narcissism, a trend for suicidal people to want to take others with them without their consent. I wrote last week about how Kieran Conway, in a book in which he calls himself a “freedom fighter”, admitted responsibility for killing 21 innocent young people in the cause of a united Ireland. No one asked those young people what they thought about it. Terrorism is another kind of narcissism.

There are fuzzy boundaries between war, terrorism, crime, politics and business. Politicians use terms like “war on terrorism”, “war on crime”, “war on drugs”. Some might believe that this is part of a plan to militarise civil society. “Freedom fighters” easily morph into criminals as they resort to bank robberies and drug dealing to raise funds for the cause. Many once considered as terrorists later take their place in government.  In Ireland, there was Eamon De Valera and more recently Martin McGuinness. In Kenya there was Jomo Kenyatta; today his son is president and has had his case dropped by the International Criminal Court.

MIA made it into the news again the other day. It was not for any recent achievement but merely about a gripe that she regurgitated concerning the way Oprah Winfrey had treated her some time ago. Suggestions that MIA was terrorist sympathiser led to some people dragging out that old chestnut: “One man’s terrorist is another man’s freedom fighter”. Whenever this is said, no definition of “freedom fighter” is offered. No examples of bona fide freedom fighters are presented except for Nelson Mandela.

Ronald Reagan called the Nicaraguan Contra rebels freedom fighters. Reagan also frequently called the Afghan Mujahedeen freedom fighters during their war against the Soviet Union, yet twenty years later, when a new generation of Afghan men fought against what they perceived to be a regime installed by foreign powers, George W Bush labelled their attacks “terrorism”.

Professor Martin Rudner, director of the Canadian Centre of Intelligence and Security Studies at Ottawa’s Carleton University, says the phrase “One man’s terrorist is another man’s freedom fighter” “is grossly misleading.” It assesses the validity of the cause when it should be addressing terrorism is an act. “One can have a perfectly beautiful cause and yet if one commits terrorist acts, it is terrorism regardless.”

Distinguished scholars have devoted their lives to defining terrorism and have admitted failure. In the first edition of Political Terrorism: a Research Guide, Alex Schmid spent a hundred pages examining more than a hundred different definitions of terrorism. Four years and a second edition later, Schmid conceded in the first sentence of the revised volume that the “search for an adequate definition is still on”. Walter Laqueur despaired of defining terrorism in both editions of his  work on the subject, maintaining that it is neither possible to do so nor worthwhile to make the attempt.

“One man’s terrorist is another man’s freedom fighter” seems to mean that state authorities sometimes delegitimize opponents, and legitimize the state’s own use of armed force. Critics call this “state terrorism”.

The UN’s attempts to define terrorism failed because of differences of opinion about the use of violence in the context of conflicts over national liberation and self-determination. Since 1994, the UN General Assembly has repeatedly condemned terrorist acts using the following political description of terrorism: “Criminal acts intended or calculated to provoke a state of terror in the general public, a group of persons or particular persons for political purposes are in any circumstance unjustifiable”.

Although, in the international community, terrorism has no legally binding, criminal-law definition, there are definitions of “terrorism”. A study on political terrorism examining over 100 definitions of “terrorism” found 22 separate definitional elements. These can be summarised thus: violent acts, which deliberately target or disregard the safety of non-combatants, intended to create fear, perpetrated for a religious, political, or ideological goal.

Bruce Hoffman wrote: “By distinguishing terrorists from other types of criminals and terrorism from other forms of crime, we come to appreciate that terrorism is :

Everyone agrees that  terrorism is a pejorative term, with intrinsically negative connotations. Use of the term implies a moral judgment.  According to David Rodin, utilitarian philosophers can (in theory) conceive of cases in which the evil of terrorism is outweighed by the good that could not be achieved in a less morally costly way. Michael Walzer argued that terrorism can be morally justified in only one specific case: when “a nation or community faces the extreme threat of complete destruction and the only way it can preserve itself is by intentionally targeting non-combatants, then it is morally entitled to do so”.

Those dubbed “terrorists” by their opponents rarely identify themselves as such, preferring to use other terms such as separatist, freedom fighter, liberator, revolutionary, militant,  guerrilla, rebel,  or patriot.

The use of violent and brutal tactics by criminal organizations for protection rackets or to enforce a code of silence is usually not termed terrorism. However, “terrorists” or “freedom fighters” often use their capacity to intimidate to engage in similar activities to organised crime. While they were purportedly striving to reunite the six counties of Northern Ireland with the 26 counties of the Republic of Ireland, the Provisional IRA were also building up a criminal empire. While this might have begun as a means of financing the republican struggle, crime seemed to become an end in itself. The profits of crime might have been a reason for prolonging the conflict.

Raids on illegal distilleries in Ireland uncovered bottling and capping machinery and high- quality copies of brand labels. Many of the products were designed for use in pub optics. The IRA took the production of counterfeit spirits so seriously that it even had a quality control unit.

Conway writes about his participation in bank raids and gun battles. The IRA’s “elite robbery team” unit organised armed robberies using a tactic known as “tiger kidnapping”, where the family of an employee was held hostage to ensure co-operation. The unit played a central role in the theft of £26.5 million from the Northern Bank just before Christmas 2004 and organized three other robberies which netted a further £3 million in that  year.

According to Customs Revenue officers, about half of Northern Ireland’s filling stations sold fuel smuggled from the Irish Republic, where duty was considerably lower, at a cost to the Treasury of about £200 million a year. Fuel smuggling, much of it organized by the notorious South Armagh brigade, was probably the IRA’s single largest source of income.

The paramilitaries were involved in pirating DVDs and software and the IRA’s links with America gave it access to new releases. The IRA’s counterfeiting operations extended to fake football strips, designer clothes, power tools and a well-known brand of washing powder. A bottle of counterfeit perfume seized at a market was found to contain urine as a stabilizer.

Often the IRA invested as a silent partner in legitimate businesses. The IRA’s finance unit contributed to Belfast’s property boom by investing in houses.

The IRA received up to $6 million (£3.1 million) for helping to train  rebels in Colombia. The payment was allegedly negotiated by a former IRA “chief of staff” who had worldwide contacts — including in Libya, where republicans deposited some of the proceeds from their vast criminal empire.

The Irish gangster Martin Cahill was the subject of two feature films. In The General, Brendan Gleeson played him. In Ordinary Decent Criminals, Kevin Spacey played him. Cahill was involved in petty crime from an early age and turned to armed robbery after stealing arms from a police station. O’Connor’s jewellers at Harold’s Cross, Dublin was forced to close, with the loss of more than one hundred jobs after Cahill stole €2.55 million worth of gold and diamonds from the store.

In 1994, a gunman, who was armed with a .357 Magnum , shot Cahill in the face and torso, jumped on a motorbike and disappeared from the scene. The IRA said that it was Cahill’s “involvement with and assistance to pro-British death squads which forced us to act”. One theory is that John Gilligan, who was convicted of the murder of journalist Veronica Guerin (also shot by a motorcyclist), had Cahill killed because he was trying to get a slice of Gilligan’s drug profits.

Gilligan effectively had the complicit support of the Dublin IRA and had members of the INLA (Irish National Liberation Army) in his pay. He was importing enough cannabis to make everybody rich. He was even importing small arms, which he passed on to republicans as sweeteners.

The IRA established links with organized crime in the same areas of the Costa del Sol where many of Dublin’s top “ordinary” criminals, the “Murphia”, lived. The Murphia became the wholesale middlemen and women who supplied parts of the UK drugs markets after developing links with their British counterparts.

The dissident republican group the Real IRA was responsible for murders, attempted murders and pipe bomb attacks in the Republic. The group is believed to be extorting millions of Euros from targeting drug dealers — as well as business people — in Dublin and Cork. The Real IRA have taken over many of the security and protection rackets once run by the Provos. The dissidents are also believed to be selling some of these bombs to gangs including criminal elements within the Travelling community.

The Provisional IRA funded its terrorist activities with bank robberies and protection rackets. Martin McGuinness was the IRA Commandant for Derry. He and Gerry Adams were prominent in the labyrinthine negotiations that led to the Good Friday Agreement and the IRA laying down its arms. As a minister in the government of the statelet of Northern Ireland, McGuinness   visited Sri Lanka to advise us on peace and reconciliation. Sinn Fein, which used to be seen by voters in the Republic as the proxy of the Provisional IRA, is a major Opposition force in the Dáil today and is often mentioned as a possible coalition member of the government. Fiachra Gibbons, in the New Statesman, described Sinn Fein as “a kind of cross between Fianna Fáil and the Catholic Church, but with extra guns, paedophiles and front businesses.”

In Sri Lanka, the LTTE (Liberation Tigers of Tamil Eelam) was mainly dependent for funding in its early days on robberies and extortion.  Trading in gold, laundering money and dealing in narcotics brought the LTTE substantial revenue to buy sophisticated weaponry. They also played a role in providing passports, other papers, and also engaged in human trafficking

Those who carried out the Easter Rising in 1916 are seen in a romantic light compared to the bombers of today. However, like the bombers of today, they  believed they were entitled, although they were but a small unelected group of conspirators in a democratic country, to stage a revolution in which many innocent people were killed. “Armed struggle” generally means fanatics killing innocents by remote control. The whole point of terrorism is to induce fear among non-combatants. It is a bit rich for those committing these acts of terror against civilians to call themselves freedom fighters. Criminal acts intended or calculated to provoke a state of terror in the general public for political purposes are abhorrent, whatever political or philosophical justifications are presented.