This article appeared in The Nation on Sunday March 1 2015 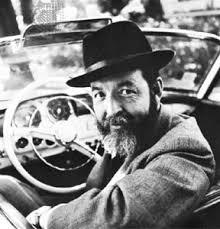 Pictures from an Institution

Jarrell published his only novel in 1954 when he was 40 and teaching at the Woman’s College of the University of North Carolina. The unnamed narrator also teaches at a women’s college, this one called Benton. “If Benton had had an administration building with pillars it could have carved over the pillars: Ye shall know the truth and the truth shall make you feel guilty.” “At Benton they wanted you really to believe everything that they did, especially if they hadn’t told you what it was.”

Benton “reasoned with the students, ‘appreciated their point of view,’ used Socratic methods on them, made allowances for them, kept looking into the oven to see if they were done; but there was one allowance they never under any circumstances made — that the student might be right about something, and they wrong.”

Many assume that Benton is modelled on Sarah Lawrence College where Jarrell taught in 1946 but Jarrell told the New York Times: “Benton is supposed to be just a type … I’ve taken things from real places, but mostly have made them up.” 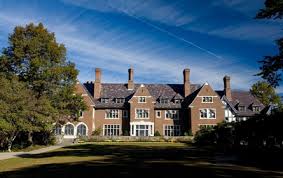 The main characters are the president of the college, Dwight Robbins, Gertrude Johnson a novelist, Gottfried Rosenbaum, a German composer and his wife Irena, a Russian opera singer, sociologists Flo Whittaker and her husband Jerrold.

Many assume that Jarrell modelled Gertrude Johnson on the novelist Mary McCarthy. The two writers did teach together and McCarthy mentions Jarrell in her novel The Groves of Academe. In an unpublished lecture, Jarrell defended himself: “I’ve got used to delivering a little two-minute speech that could be entitled: 59 Overwhelming Differences Between Gertrude Johnson and  -oh, say Senator McCarthy …I’m perfectly willing to have people think Gertrude Johnson me, or part of me- the book’s designed to make them do that; but I’m not willing to have them think my poor ugly mouse is a pretty actual lady novelist”. 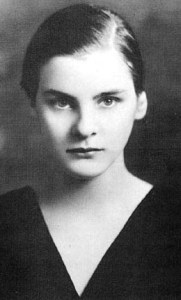 President Robbins’s first impression of Gertrude is not flattering: “her features, as far as one could distinguish them, were undistinguished. Then one noticed that she had an obstinate Irish – or, perhaps, an obstinate apish- upper lip”. Gertrude is teaching creative writing at Benton between novels. She does not suffer fools gladly and everyone is a fool. “Gertrude’s bark was her bite; and many a bite has lain awake all night longing to be Gertrude’s bark.” 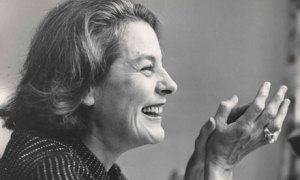 President Robbins is a former Olympic diver “who had not evolved to the stage of moral development at which hypocrisy is possible. To him the action was right because it was his.” “Morality, to him, was making a good impression on everybody, selling himself (that accurately ambiguous phrase) to everybody. He praised himself to his face just as he would have praised you to yours, except that he did it more modestly, with a kind of demure grace”.  Robbins has a public speaking voice that “not only took you into his confidence, it laid a fire for you and put out your slippers by it and then went into the other room to get into something more comfortable. It was a Compromising voice.”  “President Robbins was so well adjusted to his environment that sometimes you could not tell which was the environment and which was President Robbins”.

Gottfried Rosenbaum, Viennese composer in residence, kind, witty and Jewish. His wife, Irena, is a Russian opera singer, downscaled by age to lieder. The Rosenbaums are refugees from Nazi Europe and know all about the failed hopes of ends-justifies-means radicalism. He quotes Nijinsky’s epigram “Politics is death”. He lives out a dream of private life without political demands. He composes proverbs of his own, one of which is: “Heaven gives us habits to take the place of happiness”.

Flo Whittaker is a selfless and righteous fighter on all public issues who neither noticed nor understood any private ones. She looked as if she had woken up by chance and “her clothes had come together and involved her in an accident. She lived before Original Sin, and could only make mistakes.” “The skirt looked as if a horse had left her its second-best blanket; the sweaters looked as if an old buffalo, sitting by a fire of peat, had knitted them for her from its coat of the winter before.” Flo was “the least sexual of beings; when cabbages are embarrassed about the facts of life, they tell their little cabbages that they found them under Mrs. Whittaker.” The narrator is, in his fashion, fond of Flo: “If I were a town, there is no one I should rather have by me in a disaster”. Jerrold is “every inch the sociologist” to whom everything “was the illustration of a principle”. “As he spoke, English seemed to have been dead for several centuries, and its bones to have set up a safe, staid, sleepy system of their own, in respectable secession from existence”. The Whitakers had a bulletin board in their house on which they plotted all the activities of parents and children”.

One cannot help feeling that the narrator (and Jarrell) is using Gertrude in a cowardly way.  She is making scabrous judgements vicariously for him but, in between his own corrosive comments, he writes about forgiveness and acceptance. Writing in the New York Review of Books in December 1999, Michael Wood described this odd approach: “Gertrude is effectively given the guilt of the narrator’s cruel jokes, as if she and not he were making them, so that he can trot around the novel in genial and creepy innocence”.

The narrator claims to like Gertrude. He sees good in Flo Whittaker:  “She saw people only in hundred- thousand lots, but she couldn’t help feeling for them sometimes, one at a time- so that I thought once more, in uneasy perplexity: how shall I feel about Flo? That figure of fun, that pillar of righteousness, that type of the age, that index of the limitations of the human being, that human being?.. ‘to someone I am Flo’”.

As I mentioned in a previous article Jarrell developed a friendship with Hannah Arendt the author of The Origins of Totalitarianism. In that book she wrote that society “introduces between the private and the public a social sphere in which the private is made public and vice versa”. She believed that the “perversion of equality from a political into a social concept brought the danger of creating a society where “every individual is ’normal’ if he is like everyone else and ‘abnormal’ if he happens to be different”. 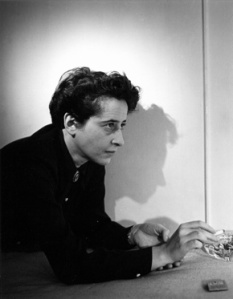 As I mentioned before, Jarrell kept successive drafts of Pictures from an Institution in a folder Arendt had given him, left over from her drafting of Origins. Gertrude’s novel might be expected to expose Benton’s faults in Arendtian terms depicting it as a self-enclosed socio-cultural system. 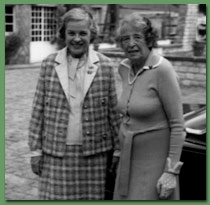 President Robbins “had the morals of a State; had, almost, the morals of an army”. A professor who had been away from Benton for several years says that he dreams about being back at Benton the way he dreams he is back in the army. This echoes what Jarrell had written in poems about the regimentation of military life taking over civilian life and academic life.

John Whittaker, the son of Flo and Jerrold, an enthusiast for Science Fiction since he was seven, tells the narrator what he thinks about the inhabitants of Benton: “Haven’t you noticed how they all talk just the same, and dress just alike, and read the same book…? And do you know why?…They’re androids”.

Jarrell uses Gertrude and Irena to convey to us some of his own views on the status of the US in the modern world.  Gertrude says: “Americans are so conformist that even their dissident groups exhibit the most abject conformity”. Gottfried is the character most kindly treated, and associated with everything in art that individualises: “To say that someone is typically anything is an unfavourable judgement. When Gottfried was least his kind he was most Gottfried”.

“Is an institution  always a man’s shadow shortened in the sun, the lowest common denominator of everyone in it? Benton was: the soldiers, as always, were better than the army in which they served, the superficial consenting nexus of their lives that was Benton”.

Filed Under: Literature, The Nation
Tags: Hannah Arendt : Mary McCarthy : Pictures from an Institution : Randall Jarrell : Sarah Lawrence College : The Groves of Academe : The Origins of Totalitarianism : Woman's College of the University of North Carolina