This article appeared in The Nation on Sunday December 7 2014

Tail flicks from another world.

In the Balance between the Animal and the Human

Roethke views man in the framework of nature, taking from nature metaphors of increase and communion. He sees the realm of spiritual beginnings in nature. Even his love poems are not just evocations of the loved one or his feelings about her. The loved one is at the centre of the physical universe and the poet communes with the elements and the natural universe through her.

Throughout his poetic career, Roethke used the idea of evolution to show forth the childhood fears buried in his subconscious and his developing self. The poems often have creatures emerging from the primeval slime and there are worms feeding on the dead. He developed a lithe structure and rhythm, which was well suited to his project of inspecting his psychological and emotional growth.

In The Lost Son, Roethke tries to come to terms with his ambivalent feelings for his father, who died when the poet was only fourteen. Louise Bogan (Roethke’s one time lover) reviewed this collection in the New Yorker on May 15 1948. She wrote: “He plunges into his subconscious as into a pond and brings up all sorts of clammy amorphous material…Where Jarrell frequently only describes, Roethke relives.” She recommended that Randall Jarrell and Roethke be read together. I intend to write about Jarrell in a future article in these pages.

The title poem of the collection has five parts in which the poet examines the various stages of his feelings of sorrow and desolation to reach a conclusion that provides hope for the future.

Roethke himself wrote of the poem:

It “follows a narrative line indicated by the titles of the first four sections: ‘The Flight’, ’The Pit’, ‘The Gibber’, ’The Return’.’The Flight’ is just what it says it is: a terrified running away – with alternate periods of hallucinatory waiting (the voices, etc.); the protagonist so geared-up, so over-alive that he is hunting, like a primitive, for some animistic suggestion, some clue to existence from the subhuman. These he sees and yet does not see: they are almost tail-flicks, from another world, seen out of the corner of the eye. In a sense he goes in and out of rationality; he hangs in the balance between the human and the animal.”

Although the first section is a recollection of childhood feelings, he is already thinking of death – there is a reference to a cemetery in the first line:

At Woodlawn I heard the dead cry:
I was lulled by the slamming of iron,
A slow drip over stones,
Toads brooding wells.
All the leaves stuck out their tongues;
I shook the softening chalk of my bones,
Saying,
Snail, snail, glister me forward,
Bird, soft-sigh me home,
Worm, be with me.
This is my hard time.

His hard time is coping with the death of his father. His flight is from this cemetery and from the fact of death. He prays not to God but to the creatures of nature to give him a sign. They only answer him in riddles – The moon said, back of an eel – and in negatives: You will find no comfort here,/ In the kingdom of bang and blab. As if in response to this comment, the section ends with a riddle posed by the poet, which describes a strange creature, part which some readers suggest is an unborn child.

He hopes to find solace in nature:

Nothing nibbled my line,

Not even the minnows came.

The second section, “The Pit” describes a period of physical and psychic exhaustion, involving a strong death wish or an unwillingness to face further hardships in the quest for human completion.

Where do the roots go?

Look down under the leaves.

Who put the moss there?

These stones have been here too long.

Who stunned the dirt into noise?

Ask the mole, he knows.

I feel the slime of a wet nest.

In “The Gibber”, there is a frenetic activity, then a lapsing back into peace.
At the wood’s mouth,

By the cave’s door,

I listened to something

I had heard before.

Dogs of the groin

The sun was against me,

The moon would not have me.

The cows and briars

After this, he finds himself at a calm centre, on the threshold of transformation and rebirth.

Do the bones cast out their fire?

Is the seed leaving the old bed?

These buds are live as birds.
Section IV returns to childhood memories, which, although dreamlike, are physically literal as well as symbolic.

A fine haze moved off the leaves;

The rose, the chrysanthemum turned towards the light.

Even the hushed forms, the bent yellowy weeds

Moved in a slow up-sway.

The roses are real and breathing. – the family greenhouse business   provided much vegetative imagery. The morning emerges from the dark night bringing a sense of renewal, a resurrection of “Papa.”

In the final untitled section, the illumination, the coming of light suggested at the end of the last passage occurs again, this time to the nearly grown man. The illumination is still only partly understood; he is still “waiting.” Like the flowers in the greenhouse, he finds himself in a fragile state as he slowly climbs out of an abyss of inner tensions:

The bones of weeds kept swinging in the wind,

Above the blue snow.

It was beginning winter,

The light moved slowly over the frozen field,

Swinging in the wind.

There is a deliberate echo of Eliot’s Four Quartets. Both works explore the self, its history and development. Both seek realisation in a spiritual order, although Roethke avoids orthodox religion. Roethke probably intended the echo as a statement of difference. For Roethke, the moment of light lacks any theological resonance, as it would have in Eliot. The illumination for Roethke is natural and based firmly on personal knowledge and evidence, on the individual’s understanding of the transcendent. The visitation at the end of “The Lost Son” displays the progress of the spirit over the difficult stages of evolution.

Praise to the End!, published in 1951, combines several long poems from The Lost Son with new poems that continuing the same themes. Bogan described Roethke’s subject as, “the journey from the child’s primordial subconscious world, through the regions of adult terror, guilt, and despair, toward final release into the freedom of conscious being.”

Roethke himself wrote: “the method is cyclic. I believe that to go forward as a spiritual man it is necessary first to go back. Any history of the psyche (or allegorical journey) is bound to be a succession of experiences, similar yet dissimilar. There is a perpetual slipping-back, then a going-forward; but there is some ‘progress’. Are not some experiences so powerful and so profound (I am not speaking of the merely compulsive) that they repeat themselves, thrust themselves upon us, again and again, with variation and change, each time bringing us closer to our own most particular (and thus most universal) reality? We go, as Yeats said, from exhaustion to exhaustion. To begin from the depths and come out- that is difficult; for few know where the depths are or can recognize them; or, if they do, are afraid.”

Roethke offered these suggestions on how to read the new book: “You will have no trouble if you approach these poems as a child would, naively, with your whole being awake, your faculties loose and alert. (A large order, I daresay!) Listen to them, for they are written to be heard, with the themes often coming alternately, as in music, and usually a partial resolution at the end. Each poem … is complete in itself; yet each in a sense is a stage in a kind of struggle out of the slime; part of a slow spiritual progress; an effort to be born, and later, to become something more.” 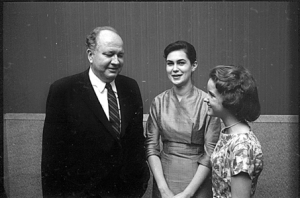 Next week, I will discuss Roethke’s 1953 collection The Waking.