An interesting book on militarisation was recently published by Michigan State University Press. Winona LaDuke calls her book The Militarization of Indian Country. That title may be a bit of a stumbling block to PCers who think we should be talking about “Native Americans”. For the sake of consistency, I will follow Ms LaDuke and use the term “Indian”. The most accurate term would probably be “the indigenous people of the territory now known as the USA”. The term “Native American” was the bright idea of the US government itself and has met with only partial acceptance. No other proposed naming conventions have been accepted by all indigenous groups. According to the 1995 US Census, 50% of people who identified themselves as indigenous preferred the term “American Indian,” 37% preferred “Native American” and the remainder preferred other terms or had no preference.  “American Indian” appears often in treaties between the USA and the indigenous peoples with whom they have been negotiating since the colonial period.

As always with body counts the facts are in dispute.

It is impossible to estimate how many Indians populated the area now covered by the USA before the white man arrived. Some scholars of the subject speak of an inflated” numbers game”; others charge that the size of the aboriginal population has been deliberately minimized in order to make the decline seem less severe than it was. In 1928, the ethnologist James Mooney proposed a total count of 1,152,950 Indians in all tribal areas north of Mexico at the time of the European arrival. By 1987, in American Indian Holocaust and Survival, Russell Thornton was giving a figure of well over five million, while Lenore Stiffarm and Phil Lane Jr suggested a total of 12 million. Anthropologist Henry Dobyns in 1983 had estimated that in 1492 the aboriginal population the present territory of the USA was about 10 million.

It seems that a mere 250,000 Indians were still alive in the territory at the end of the 19th century. Today there are around half a million Indians in the USA.

According to Ward Churchill, professor of ethnic studies at the University of Colorado, the drastic reduction of the Indian population represents a “vast genocide . . . , the most sustained on record.”  David E. Stannard, of the University of Hawaii, wrote that by the end of the 19th Century, American Indians had undergone the “worst human holocaust the world had ever witnessed roaring across two continents non-stop for four centuries and consuming the lives of countless tens of millions of people.”

Readers of Gordon Weiss might pause at the open-ended vagueness of that phrase “countless tens of millions of people” but surely there is no doubt that a lot of indigenous people died.

The simple definition of genocide is: “The deliberate killing of a large group of people, especially those of a particular ethnic group or nation.” The international legal definition of the crime of genocide is found in Articles II and III of the 1948 Convention on the Prevention and Punishment of Genocide. Article II describes two elements of the crime of genocide: 1) the mental element, meaning the “intent to destroy, in whole or in part, a national, ethnical, racial or religious group, as such”, and 2) the physical element which includes five acts described in sections a, b, c, d and e. A crime must include both elements to be called “genocide.” Article III described five punishable forms of the crime: genocide; conspiracy, incitement, attempt and complicity.

The Trail of Tears is a name given to the forced relocation by the US Army of Indians from south-eastern parts of the USA following the Indian Removal Act of 1830. Many suffered from exposure, disease and starvation on the route. Many died. By 1837, 25 million acres had been opened up for predominantly white settlement.

Even before the Indian Removal Act, the fixed boundaries of autonomous tribal nations were subject to continual cession and annexation. There was pressure from squatters and the threat of military force in the newly declared US territories (those federally administered regions whose boundaries supervened upon the Indian treaty claims). As these territories became states, state governments sought to grab the land therein. These pressures were magnified by US population growth and the expansion of slavery.

Relocation continued after the Trail of Tears and continues today. In theory, Indians are free to live anywhere. It is estimated that one-third to one-half now lives in cities. Nowadays, there exist about 300 federal reservations, with a total of 52,017,551 acres held in trust by the federal government, the large majority west of the Mississippi. There are also 21 state reservations, most of these in the East.

Indians and the Military-Genocidal Complex

According to Ms LaDuke, many Indians live in places called Fort Something or Other, in poor and devastated zones. She asserts that the military: “has taken our lands for bombing exercises and military bases, and for the experimentation and storage of the deadliest chemical agents and toxins known to mankind… Uranium mines, depleted uranium testing, and nuclear waste storage have done as much or more damage to Indian Country as nuclear bomb testing.”

In Alaska, 700 active and abandoned military sites include 1,900 toxic hot spots. There was an aborted plan to create a harbour in Alaska by dropping a series of nuclear bombs. If the Great Sioux Nation were in control of its 1851 treaty areas, LaDuke claims, “it would be the third greatest nuclear weapons power on the face of the earth.”

Ethnic Cleansing by Assimilation and Abduction

In the 1880s the US government implemented a policy of forced assimilation. Lakota children as young as five were forcibly removed from their homes and taken to boarding schools hundreds of miles away to boarding schools, where the motto was “Kill the Indian, Save the Man.” The policy continues today.

Nearly $100 million in federal funding is being sent to South Dakota to administer foster care each year. These federal funds constitute a significant portion of state expenditures, and, according to the NGO Families USA, they have “a positive and measurable impact on state business activity, available jobs, and overall state income.” All this demonstrates a strong financial incentive for state officials to take high numbers of Indian children into custody.

A vigorous campaign is currently being waged by the Lakota People’s Law Project to secure the return of over 2,200 Lakota, Dakota and Nakota children illegally taken from their homes by DSS. In one case a young boy was abducted when he left his relatives to use the restroom while family members were attending a high school graduation ceremony. It was weeks before his family found where he had been taken. 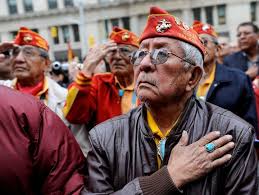 It has been suggested that American Indians, as a result of the loss of life, land, and destructive government policies, suffer from a legacy of historical unresolved grief, which shares PTSD symptoms. The research that has been conducted suggests that American Indians suffer from PTSD at a greater rate in comparison to the general population; data indicates that 22% of have PTSD. In one population of American Indian adolescents it was found that 96% of children had witnessed at least one traumatic event and 75% had some symptoms of PTSD. 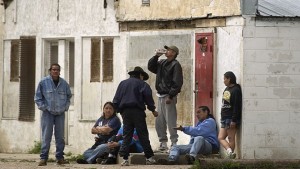 In spite of being victims of the army, Indians have made a disproportionate contribution to the armed forces. Many Indians recognize in current US wars echoes of wars against the Indian nations. Nevertheless, Indians have the highest military enlistment rate of any ethnic group and the largest number of living veterans (about 22 percent of Indians aged 18 or over). “How,” LaDuke asks, “did we move from being the target of the US military to being the U.S. military itself?” She opposes militarism but wants veterans to be honoured.

Around 1.7% of US active duty forces are Indian; their proportion of the US population is 0.8%. Sergeant Brandon Bowden, a recruiting officer says: “Many want the college benefits; others are out for some skill set they could use, as the economy is very bad in this small area. Quite a few are looking for jobs, with the unemployment rate so high.” One mother was furious at the US military for the death of her son in Afghanistan. She reminds herself of what her son always used to tell her. “They are the ones who sign my cheque Mom; they are the ones who help me support my family.”